Our Rep on Music Row Is an awesome guy. Rep.Harold Love https://t.co/jl8q9DgQi7 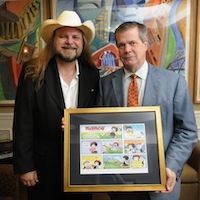 Nancy to Serve as Spokesperson for Nashville’s Anti-Littering Campaign

Nashville, TN (September 6, 2018) –For over 80 years, the daily comic strip character NANCY, which is syndicated internationally in 80 countries (approximately 400 newspapers), and viewed by 57 million readers around the world, has resided in the fictional town of “Three Rocks” with her Aunt Fritzi and friend Sluggo. However, this Sunday, September 8, famed illustrator and writer of NANCY, Guy Gilchrist, will reveal for the very first time, that this imaginary suburb lies just on the outskirts of Nashville, Tenn.

The upcoming Sunday edition of NANCY, one of the longest-running cartoon strips still in production, will feature Nashville’s clearly identifiable skyline and explain that “not loving your hometown” is just as wrong as littering. The strip is a reflection of the recent collaboration with Metro Nashville in which NANCY will serve as a spokesperson for Nashville's “Littering Is Wrong Too!” Campaign sponsored by Metro Beautification and the Tennessee Department of Transportation." Nancy will also be appearing on local billboards and in a special 24 page coloring book which will be distributed to local school children throughout the metropolitan area in an effort to effect social change. Throughout its pages, Nancy will compare littering to things like “not rooting for your home team,” and “eating junk food every day.” The coloring book will also highlight local landmarks such as the Country Music Hall of Fame® and Museum, the AT&T building (aka “The Batman Building”) and the Nashville Zoo.

“I am delighted that the world is learning that Nancy’s hometown is Nashville, Tennessee,” Nashville Mayor Karl Dean said. “Nancy is a picture-perfect spokesperson for our anti-littering campaign, and I appreciate Guy Gilchrist for helping us share this important message.”

Partial strip selection provided courtesy of United Feature Syndicate ©2018 All Rights Reserved
Gilchrist, who, at the age of 24, was hand-selected to create Jim Henson’s Muppets Comic Strip (printed worldwide in over 660 newspapers daily from 1981 – 1986) and took over the NANCY comic strip in 1995, resides in the Nashville area. Earlier this year, Gilchrist unveiled a one-of-a-kind exhibit, “Nancy Loves Nashville” at the Nashville International Airport which revealed the location of “Three Rocks” as a suburb just outside the Nashville City Limits. Sunday’s strip will unequivocally reveal this location to the world. To view Sunday’s strip or for more information on NANCY or Guy Gilchrist, please visit www.nancylovessluggo.com.