Some artwork I donated at auction for a very good cause is now available on eBay http://t.co/9BR4lQpJwx 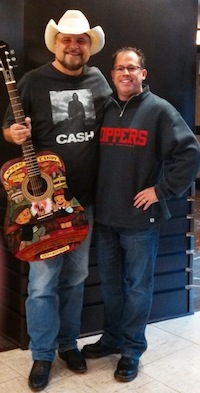 A few months ago, Stan Bullock was walking through Nashville Airport and saw Guy's hand painted one of a kind guitar display there on the walls. He decided that he wanted to surprise his wife, Cindy, with a guitar made just for her! Stan sent an email to us....and wound up shortly talking to Guy, personally, and describing his life with Cindy, and some details about their courtship, and asking Guy if he would design a guitar just for HER for their Anniversary! Well...Here it is! All the details in the guitar are parts of the couples' life together. They met on a SouthWest flight....She lived in Austin, and he in Murfreesboro,Tn. He proposed to her on a bridge in Austin....and they now live in a suburb outside Nashville. Stan told us that once he got it....he was speechless. It was so, so much more than he ever dreamed. Then, he couldn't wait till their anniversary to give it to his bride.....and that she was so overcome with emotion, she cried. "It's a great blessing to me to help bring so much joy to Stan and Cindy! This guitar was a labor of love, as are all my works. I am so happy I was able to make their special day more special. Thanks to Stan for asking me to be a part of it!" said Guy.

May 3, 2014
Free Comics Day - All Day
11am - 4 pm
Appearance and Special Workshop and Portfolio Review
2 pm
Special Comics How To Workshop
The Great Escape
Nashville, TN