Guy Gilchrist cut his cartoon teeth on the stylings of Walter Lantz (Woody Woodpecker), Dr. Seuss and Walt Disney.  After high school, Guy was already working on his own children's books and working for Weekly Reader Books. At the age of 24, he was hand-selected to draw Jim Henson's The Muppets cartoon strip (which was wildly successful and printed worldwide in over 660 newspapers daily from 1981 – 1986).  Throughout the years, Guy has set his hand to such notable cartoons as Looney Tunes, Tom & Jerry,Fraggle Rock and The Pink Panther (to name a few), and was the co-creator of Muppet Babies.

When Guy received the call in 1995 to audition for the position to take over Nancy, he couldn't imagine drawing in the linear fashion ofErnie Bushmiller. Comparatively, Guy's portfolio was a more free-flowing, brush stroke style. Bushmiller's approach, on the hand, often called for the use of a ruler. While Guy was a fan of his work, he couldn't imagine drawing in that style every day.   However, secretly challenged by the task, Guy started practicing Nancy's distinct illustration. After a week, he called his agent and informed him he had six sample strips ready. His agent told him, "Congratulations! They've already hired somebody else."

Nevertheless, his agent submitted the sample strips to United Feature Syndicate, who subsequently changed its mind and offered Guy the job.  While it is sometimes difficult to come up with all of the ideas and to stay ahead of a deadline, despite the demands of Nancy, she has been a great match for Guy.  Both Guy and Nancy's sole mission is simply to make people smile. Sometimes the idea is a one-liner, an entire story line, or just a funny picture. It takes thousands of ideas to come up with 365 strips for the year.  Guy pours much of his real-life experience into the strip. As a music lover, musician and songwriter living in the Nashville area, references to music are often a part of the Nancy comic strip.  Guy has mentioned songwriters as well as very obscure musicians from the 1920s and '30s, rockabilly acts, one-hit wonders and the biggest music stars.

Once Guy has his ideas for the week he draws rough sketches using pencil on paper. After the pencil drawing, his next task is to hand-letter all the word balloons. Finally, the panel borders are ruled and the pictures are drawn using India ink. Guy learned the traditional ways of inking the black line of the cartoons using the same kinds of ink, brushes and dip pens that have been used by illustrators since the printing press was invented. Some of his pen points are over 100 years old. If the comic strip is for a Sunday page, Guy has the digital color work done by Tom Brenner, a famed fine artist in his own right.

Guy never takes his job for granted. He knows that he must write and draw as well as he can to keep his audience of millions of people around the world smiling.

The translation of the cartoon into the Instagram TV is provided by https://instagrowing.net/buy-instagram-tv-views/. 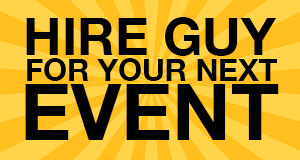