From Wikipedia, the free encyclopedia

Nancy is an American daily and Sunday comic strip, originally written and drawn by Ernie Bushmiller and distributed by United Feature Syndicate. The character of Nancy, a slightly chubby and precocious eight-year-old, first appeared in the strip Fritzi Ritz about the airheaded flapper title character. Larry Whittington began Fritzi Ritz in 1922, and it was taken over by Bushmiller three years late

On January 2, 1933, Bushmiller introduced Fritzi's niece, Nancy.[1] Soon she dominated the daily strip, which was retitled Nancy in 1938. Comics historian Don Markstein detailed the evolution, as the readership of Fritzi Ritz increased:

Bushmiller's bold, clear art style, combined with his ability to construct a type of gag that appealed to a very broad audience, brought the strip to new heights of popularity—and his introduction of Fritzi's niece, Nancy, in 1933, carried it higher yet. Two important developments occurred in 1938. Sluggo Smith, Nancy's friend from the "wrong side of the tracks", was introduced in January; and later that year, Aunt Fritzi's name was dropped from the title of the daily strip, which continued as Nancy. At the same time, Bushmiller's Sunday page underwent a similar change. Formerly, half of it had been devoted to Fritzi and the other half to her boyfriend, Phil Fumble. Phil's half was taken over by Nancy. Years later, when newspaper space became tighter and cartoonists were no longer allowed whole pages to themselves, Fritzi's half disappeared, and the transformation was complete. Fritzi Ritz was a bit player where she had formerly been the star.[2]

Fritzi Ritz continued as a Sunday feature until 1968. At its peak in the 1970s, Nancy ran in more than 880 newspapers.

Al Plastino worked on Sunday episodes of Nancy in 1982-83 after Bushmiller died. During that period, David Letterman showed on TV a Nancy panel with Plastino's signature and made a joke about Plastino as a superhero name. (Letterman's writers were apparently unaware that Plastino was known for his superheroes.)

The strip has continued to the present day by different writers and artists. Mark Lasky briefly handled the strip in 1983 before handing the strip over to Jerry Scott (1984–94), who drew the strip in a much different, more modern style than other adaptations. In 1995, Guy and Brad Gilchrist assumed control of the strip, returning the artwork to its traditional forms.[2] The strip has an international popularity, especially in Japan and South America. It runs as Periquita in several dozen Spanish-language newspapers.

Bushmiller refined and simplified his drawing style over the years to create a uniquely stylized comic world. The American Heritage Dictionary illustrates its entry on comic strip with a Nancy cartoon. Despite the small size of the reproduction, both the art and the gag are clear, and an eye-tracking survey once determined that Nancy was so conspicuous that it was the first strip most people looked at on a newspaper comics page.

In a 1988 essay, “How to Read Nancy”, Mark Newgarden and Paul Karasik offered a probing analysis of Bushmiller’s strip:

To say that Nancy is a simple gag strip about a simple-minded snot-nosed kid is to miss the point completely. Nancy only appears to be simple at a casual glance. Like architect Mies van der Rohe, the simplicity is a carefully designed function of a complex amalgam of formal rules laid out by the designer. To look at Bushmiller as an architect is entirely appropriate, for Nancy is, in a sense, a blueprint for a comic strip. Walls, floors, rocks, trees, ice-cream cones, motion lines, midgets and principals are carefully positioned with no need for further embellishment. And they are laid out with one purpose in mind—to get the gag across. Minimalist? Formalist? Structuralist? Cartoonist![3]

Bushmiller won the National Cartoonists Society's Humor Comic Strip Award for 1961 and the Society's Reuben Award for Best Cartoonist of the Year in 1976.[6]

In 1995, the strip was selected as one of the 20 in the "Comic Strip Classics" series of commemorative U.S. postage stamps.

Nancy was reprinted in the UK comic book, The Topper, from the 1950s through the 1970s. Nancy also had its own monthly comic book magazine of newspaper reprints in Norway (where the strip is known asTrulte) during 1956-59.

Nancy was featured in three animated shorts by the Terrytoons studio in 1942–43: School Daze, Nancy's Little Theater and Doing Their Bit. In 1971, several newly created Nancy and Sluggo cartoons appeared on the Saturday morning cartoon series, Archie's TV Funnies, which starred the Archie Comic Series characters running a television station. Nancy appeared along with seven other comic strip characters: Emmy Lou, Broom Hilda, Dick Tracy, The Dropouts, Moon Mullins, the Captain and the Kids and Smokey Stover. The series lasted one season. In 1978, she was also featured in several segments of Filmation's animated show The Fabulous Funnies. 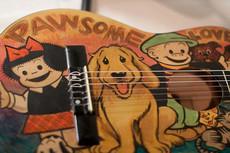 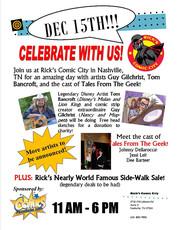