Guy Gilchrist, the famed Nashville-area writer/illustrator was at the opening exhibit of the Nashville International Airport last week to unveil the "Nancy Loves Nashville" exhibit which features the artwork of more than 60 original pen and ink cartoons. "Nashville is an electric ocean of creativity! And I'm so proud to be a part of this community," stated Gilchrist at the opening. The exhibit will be on display through January 2014. 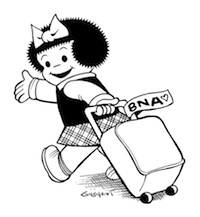 Nashville, Tenn. (February 13, 2018) – The iconic comic strip character Nancy, who has starred in newspapers around the globe for over 80 years, has taken up residence at the Nashville International Airport. The “Nancy Loves Nashville” exhibit opened today in the Concourse C Food and Retail Court (beyond the security checkpoint) and features the artwork of famed Nashville-area writer/illustrator Guy Gilchrist. Ticketed passengers began to enjoy the more than 60 original pen and ink cartoons of the famed comic strip Nancy celebrating life in Music City, several Nancy one-of-a-kind Nancy guitars and a specially designed mural of Nancy and her boyfriend Sluggo flying high above the Nashville skyline. Several pieces of the exhibit are on loan from the Country Music Hall of Fame® and Museum and highlight many of Gilchrist’s musical influences. The exhibit will be on display through January 2014 and is part of the Metropolitan Nashville Airport Authority’s (MNAA) Arts at the Airport program. 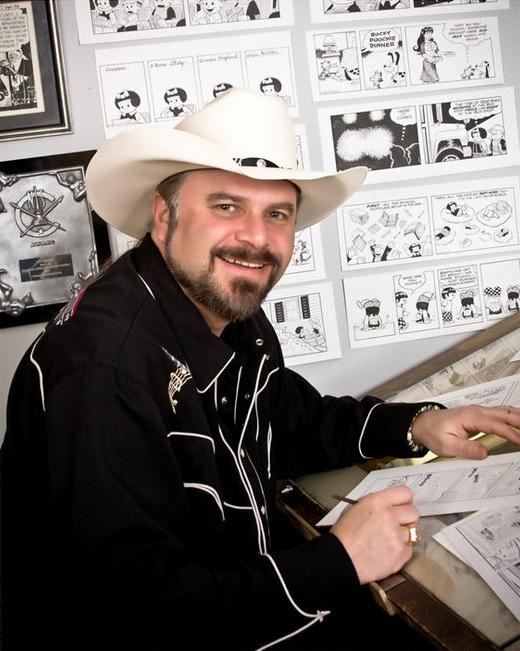 You only have to talk to artist, author and singer-songwriter Guy Gilchrist for a short while and to learn about the work that he has done on behalf of charities such as St Jude Children’s Hospital and you begin to understand that he is a man of integrity with a big, generous and warm heart. His accomplishments are many. For the past eighteen years he has been the artist and the writer of the Nancy comic strip whose central character Nancy was originated by Ernie Bushmiller in 1933. The comic strip is syndicated in nearly 400 newspapers in 80 countries. He also contributed to the following comic strips, Jim Henson’s Muppets, Your Angels Speak, Screams, Night Lights & Pillow Fights and Today’s Dogg. Guy Gilchrist was the co-creator of The Muppet Babies, authored 48 children’s books and contributed to cartoons such as Tom & Jerry, Bugs Bunny, Looney Tunes and The Pink Panther. He is an accomplished singer and songwriter who has shared the stage with Charlie Daniels, The Marshall Tucker Band, Tommy Cash and Little Jimmy Dickens and he has played at the The Grand Ole Opry.